Insects devour a third of the world’s harvests each year. How can we fight these pests without endangering the huge numbers of useful insects? Fraunhofer IME has imitated one of nature’s clever tricks to protect plants in an environmentally friendly way.

German Federal Minister of Food and Agriculture Cem Özdemir is afraid that East Africa is facing its worst famine in 40 years. When it comes to what she calls "the largest famine since the Second World War," Minister for Economic Cooperation and Development Svenja Schulze believes "the situation is extremely serious." The best-known causes are the coronavirus pandemic, climate change and the associated severe droughts, and the war in Ukraine — but crop failures due to pests also play a role here. A team of researchers from the University of Twente has calculated that almost a third of the crops cultivated worldwide are lost to diseases and insect pests. The worst affected crop is rice, but potatoes, wheat, soy beans and corn also experience losses of between 17 and 23 percent. "We are concerned to see that certain insect pests are spreading massively," confirms Prof. Andreas Vilcinskas of the Fraunhofer Institute for Molecular Biology and Applied Ecology IME in Giessen. 2018 saw an EU-wide ban on using deadly neonicotinoids for pest control, which is an important step for protecting bees and other useful insects. However, without an effective substitute, "farmers feel they’ve been left in the lurch, because their weapons have been taken away," according to Prof. Vilcinskas.

When it comes to beet cultivation, you can understand their urgency: The crop yields of more than 26,000 beet farmers in Germany are being threatened by aphids and plant hoppers. Only a few millimeters in size, these insects suck on the leaves of the crop and infect them with viruses and bacteria, which can reduce the sugar content in the beet by up to 40 percent. The aphids and plant hoppers spread rapidly — in Germany, they have already affected around 40,000 hectares of arable land. "Since the ban on neonicotinoids, we’ve had nothing to use against them," says Prof. Vilcinskas. "Our goal is to develop new strategies for pest control, beyond using chemical pesticides that have the side effect of killing off useful insects."

Genome research is the key to protecting crops without harming the environment and insects. First of all, researchers need to identify the genes that are typical of and required for the survival of certain types of pest — but for that type only! Once they have found these genes, the researchers look for a targeted way to silence them. As is often the case, biologists have found a way by imitating nature itself: It’s called RNA interference (RNAi for short), or RNA silencing. "All higher organisms use this mechanism to protect themselves against invading viruses. We want to use it to silence species-specific genes," explains Prof. Vilcinskas. They achieve this remarkable feat using double-stranded RNA fragments with sequences that exactly complement the selected genes in the insect in question, as animal and plant cells normally only produce single-stranded RNA. As soon as they detect doubled-stranded RNA fragments in their cells, they recognize them as foreign and begin to break them down. A significant side effect here is that during this process, individual RNA strands from the same sequence are simultaneously destroyed. If you want to silence a single gene, all you need to do is copy the RNA sequences that it codes as double-stranded RNA and make sure that the RNA gets into the pests, i.e. is consumed.

There are two ways of doing this. The first is to program the genome of the cultivated plant so that it produces the double-stranded RNA that counteracts an essential gene in its predator. "The best thing about this method is that it allows you to have species-specific control over pests, so long as we can silence the selected genome in this organism alone, and not in others. This means even closely related organisms are not affected, especially bees and other animals, or people," emphasizes Prof. Vilcinskas.

Taking the example of aphids, we can see how his team plans to proceed. This insect feeds on the plant sap by breaking through to the vascular tissue within the host plant. A special protein in its saliva hardens upon contact with the sap, and acts like a drinking straw for the aphid. "If we can silence this specific protein using RNAi, they can no longer form this drinking straw, and will starve to death," explains the biologist. Other research groups have succeeded in using RNAi technology to make potato plants resistant to voracious potato beetles. It is hoped that this new technology will be used worldwide as an environmentally friendly alternative to poisonous crop spraying. However, due to significant reservations regarding the use of GM plants, it is not yet clear whether the resilient pea and potato varieties will also be cultivated in Germany in the future.

For this reason, Prof. Vilcinskas favors the second option. "We want to produce the double-stranded RNA in the lab and then spray it directly on the fields. The pests will ingest it there as they feed. Even in large quantities, this is harmless, as RNA doesn’t contain any toxic compounds and completely decomposes outdoors," explains the insect researcher. However, the biomolecules must not be allowed to decompose or be digested too soon. "Many insects produce enzymes in their saliva that break down RNA. We need to find a solution for that as well. Ultimately, the RNA must be ingested by the insects and move through the intestinal epithelium intact. Only then can it take effect. This means that for each type of pest, we have to develop a suitable formulation that fulfills all these conditions and can also be sprayed using commercially available equipment," explains the Fraunhofer researcher. A compound developed by Fraunhofer IME together with the US company Greenlight Biosciences has already been proven successful in combating the potato beetle, and is now undergoing field testing in collaboration with the Julius Kühn Institute. "In the USA, the outdoor tests carried out this year have been successful, and they have already applied for authorization to bring it on the markets," says Prof. Vilcinskas. "Next we’re going to test an agent to combat common pollen beetles. These beetles eat the pollen from rapeseed blossoms, which prevents the rapeseed pods from maturing."

Tried and tested — and affordable

In order for the new biopesticides to be competitive, they need to be affordable. The Fraunhofer researchers in Giessen are working toward this goal with Greenlight Biosciences. The company has developed and patented a cell-free process for synthetic RNAi production that is significantly less expensive than the conventional production methods based on genetically modified yeast cell cultures. The German Federal Ministry of Food and Agriculture is also betting on RNAi-based pesticides, and is supporting Fraunhofer IME in developing appropriate compounds for combating aphids and plant hoppers. At the same time, Prof. Vilcinskas has his sights set on dozens of other harmful bugs, including a number of beetles and caterpillars — and about a dozen viruses that affect one of our most important "farm animals": honey bees. The deadly pathogens are spread through beehives by mites or other parasites, or are transmitted from one insect to the next as they visit flowers.

Prof. Vilcinskas believes RNAi could also be helpful here. "We want to silence genes that these viruses require to live, in order to prevent them from multiplying." His team are working on finding specific gene sequences and packaging them in such a way that they remain stable for several days. If dissolved in sugar water, they could be fed to honey bees in winter, and then unleash their healing effects. Prof. Vilcinskas stresses that this would also benefit their wild relatives. "More and more often, we’re seeing that viruses from honey bees are being transmitted to bumblebees and other wild bees when they visit flowers. If we could render these pathogens harmless using RNAi, that would be an important step toward saving these pollinators, as they are crucial in the natural world and in agriculture." There are around 850 known species of aphid in central Europe alone.

The topic is also interesting for you? Then please feel free to contact us! 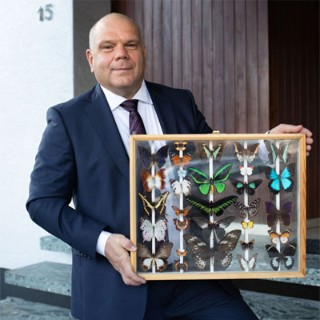 Head of the Institute Section »Bioresources «