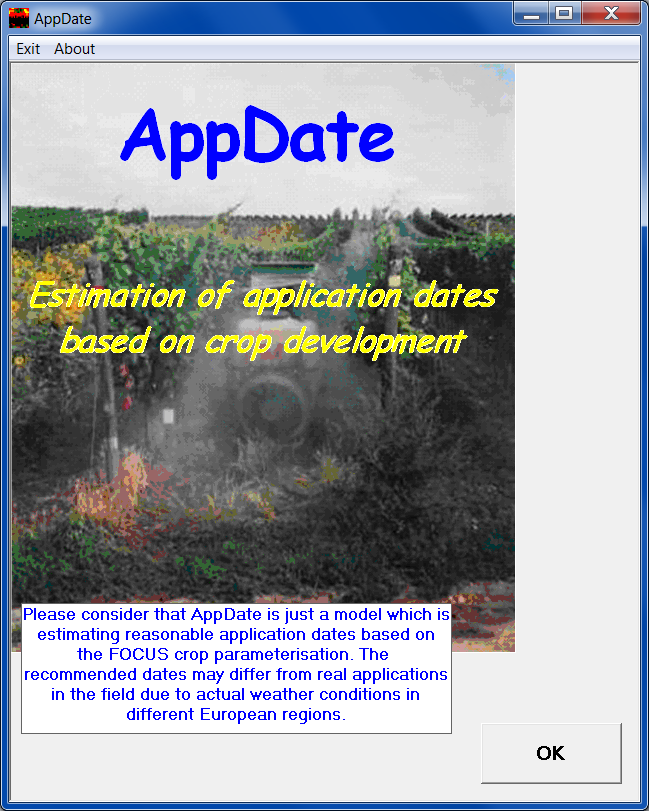 AppDate is software that calculates consistent application dates which can be used in further FOCUS modelling. Currently, a couple of FOCUS models (e.g., PEARL, PELMO, MACRO, PRZM, and TOXSWA) are used in European pesticide registration to assess predicted environmental concentrations (PEC) in ground and surface water. Apart from the internal settings FOCUS scenarios, main drivers of the simulations are the application pattern (rate and date of application) and the physical-chemical properties of the compounds.

Unfortunately, FOCUS did not provide the link between crop development stages (BBCH codes) and actual dates when these stages are reached. However, for all FOCUS models the distinct definition of application dates is essential.

The original version of AppDate (version 1.0) was developed in 2006 and included only recommendations for the groundwater location “Hamburg”. In 2012 version 2.0 of AppDate was released with now all FOCUS groundwater scenarios included (Klein 2012). The most recent version is AppDate version 3.0 Version. It was completely revised and includes, e.g., also recommendations for potato tuber.

The BBCH codes describe the development of supported crops by in total 9 principal stages as summarised in the table. They have been developed by three organisations (Biologische Bundesanstalt, Bundessortenamt, CHemische Industrie, IVA) already in 1992 and were updated in 2001.

Further information to the model: