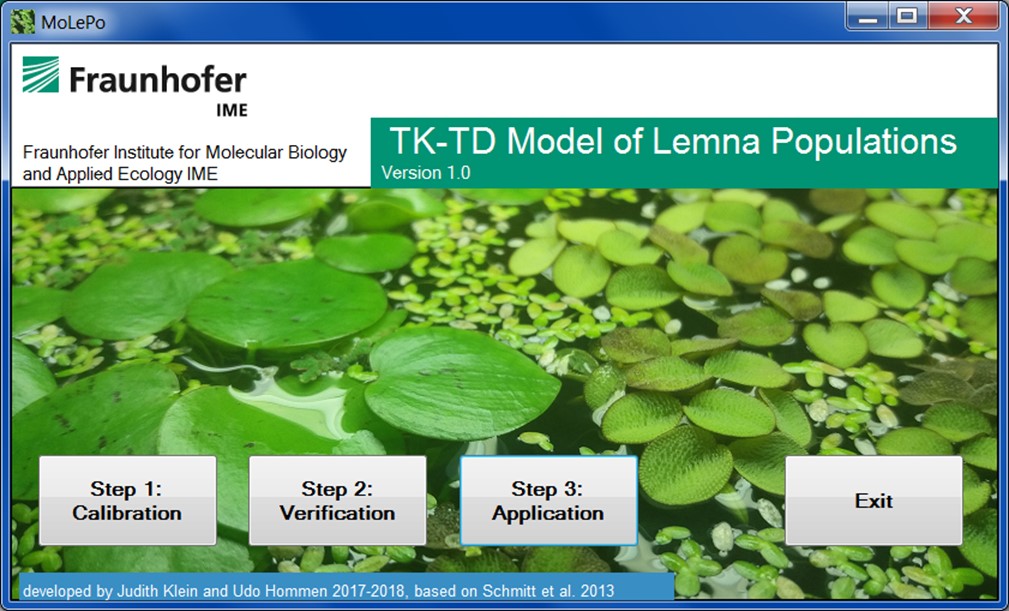 MoLePo is a user-friendly stand-alone software based on the duckweed model by Schmitt et al. (2013) covering all necessary steps for its use in risk assessment, i.e., as a tier 2 and tier 3 tool according to the aquatic guidance document.

Options to use the model. The implementation can be used for three steps of analysis:

The software can handle constant as well as time-variable exposure. Exposure data can be provided in time steps down to one hour. The user may decide between exponential as well as linear interpolation of external concentration data. For calibration, several objective functions are implemented including minimizing least squares and maximizing log likelihood. The program offers the possibility to propose estimated initial values for the parameters that have to be calibrated. Furthermore, the program solves the model numerically. For calibration and verification, several goodness of fit measurements are included amongst others the scaled total error or model efficiency. The model results are presented visually in figures (external and internal concentration, growth over time, jpg format) and in a written report (txt format). The confidence intervals of fitted values are calculated via profiling of the likelihood.
In addition to that, the program offers the possibility to perform an uncertainty and sensitivity analysis to assess the relevance of the different models paramters for the model output.

Comparison to Schmitt et al. 2013. The model is changed with respect to the following aspects:

User interface and friendliness. MoLePo is implemented in VB.Net (Version 4.7.02053) as a user-friendly stand-alone program. The user does not need programming skills. The graphical user interface is intuitive and a short manual is provided.

Numerical methods implemented. The approximate solution of the ordinary differential equation of the Lemna model is based on discretization using a modified Euler method. Therefore, the maximum step size is equal to one hour. In case that the relative change in a state variable (e.g. internal concentration, biomass) in one time step, or the local error, is greater than a certain bound (maximum of 0.001 is recommended), the step size is successively divided in half (aber nur bis runter auf 1 h). The calibration of the model parameters is a non-linear optimization problem. For this, VB.Net provides the free Nelder-Mead Solver (Microsoft Solver Foundation).